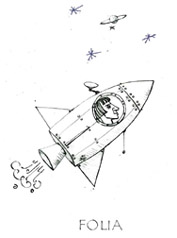 Ruskin had reported that there was one time, on the capital of one of the columns supporting the Ducal Palace in Venice, a relief depicting a horseman, captioned "Folia". Rightly so—Venice is no more place for horse riding than the outer space is for living flesh.

The relief mentioned by Ruskin no longer exists, having succumbed to one of the waves of 'restoration'.

DD would like to suggest a new allegory of folly be put up in the American capital, on one of the columns adorning NASA's headquarters in Washington to be precise. It should depict a space capsule with a human head visible through a porthole. The caption should read the same.

We stands resolutely against the idea of human space flight, seeing it as an expensive and dangerous folly benefiting no one but the aerospace contractor and the politician in search of glory and donations from the same contractor.

In July 2012, Aviation Week & Space Technology reported on the lack of interest in the International Space Station on the part of the scientific community, and expressed worry that interest in the human space flight would wane, if no meaningful science comes out of the ISS soon.

DD is of the view that in the interest of science, support for the human space flight should indeed wane, as vast sums of money are being wasted supporting human activity where human presence is not required. We assert that all research in space can be done far more cheaply and safely by robots. We present four articles on the subject.